Skip to content
‘Hey, this is a great combination of philanthropy and basketball’

This is a Great Combination of Philanthropy and Basketball 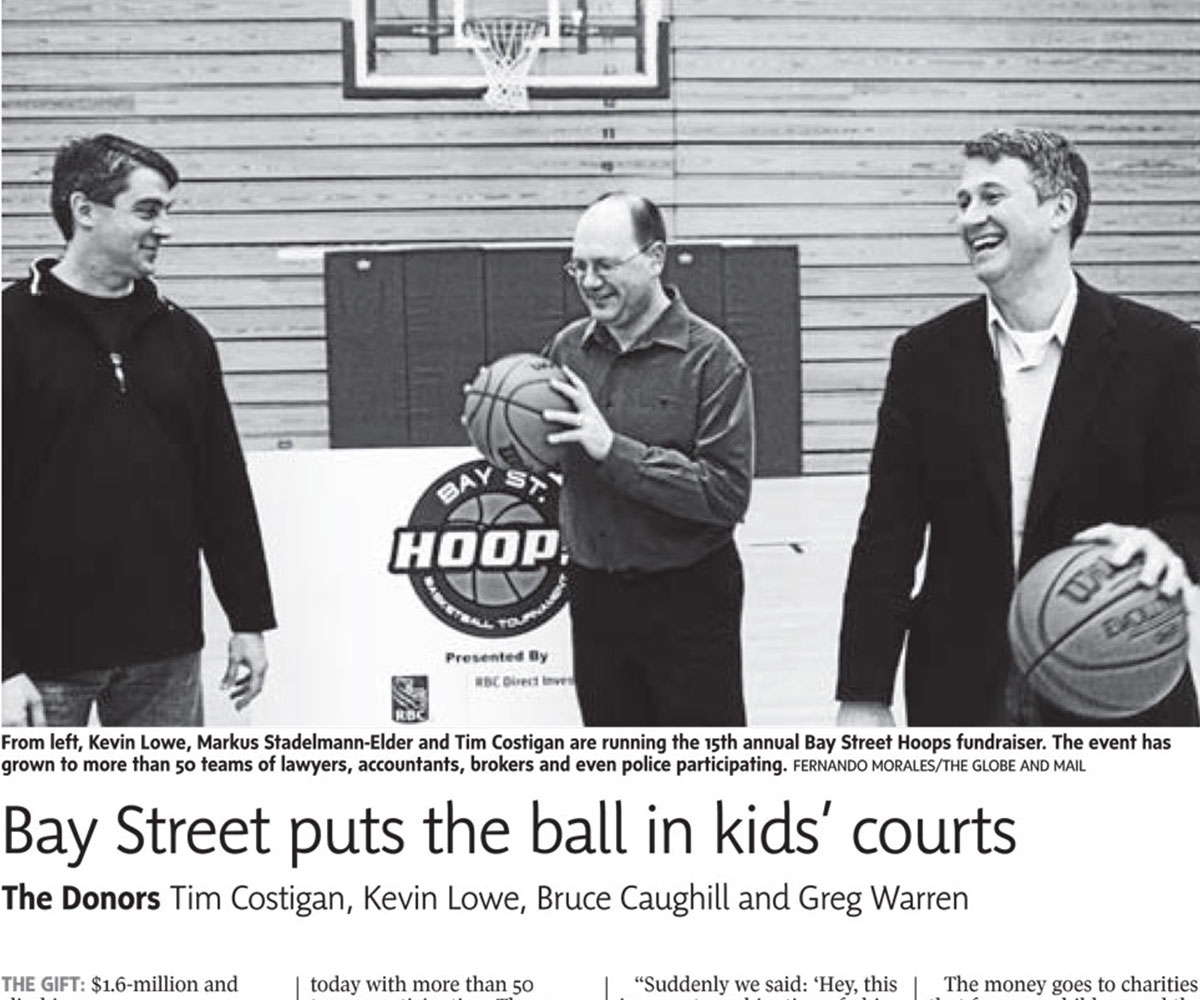 Just before the 2009 tournament (when we celebrated our 15th anniversary), Globe and Mail journalist Paul Waldie in his weekly column, Giving Back, profiled the tournament organizers. As we’re preparing for our 20th tournament in April, the article makes for an interesting read to find out how the tournament started.

Basketball fans will be glued to their televisions this week for the annual NCAA Final Four tournament. But there’s another basketball tournament underway in Toronto that offers something the Final Four can’t – donations to charity.

Bay Street Hoops will finish today with more than 50 teams participating. The annual event started 15 years ago as a small basketball league for lawyers. The organizers, Bruce Caughill and Greg Warren, tried holding weekly games but when players’ schedules kept conflicting, they decided to just have one big event every year.

With the help of friends Kevin Lowe and Tim Costigan, they rounded up eight teams and raised $8,000. The number of teams grew to 14 the following year and more than $20,000 was donated to Princess Margaret Hospital.

“Suddenly we said: ‘Hey, this is a great combination of philanthropy and basketball,’ and it took off from there,” said Mr. Costigan, who works at Travel Trust International, a travel management company.

Last year, the event attracted 70 teams, made up of lawyers, accountants, bankers, brokers and even police. The tournament has several corporate sponsors that cover the administrative costs. Each team contributes $2,500 to register, which is donated to charity, and there’s a silent auction held during a post-tournament party.

The money goes to charities that focus on children and the organizers now plan to work with various youth basketball programs as well. “Our whole mission statement is wanting to build basketball in the Toronto area, reach grassroots and just keep people involved,” said Mr. Lowe, a financial planner with Investors Group Financial Services Inc.

“This was a great marriage of my love for basketball and my love for doing things in the community,” Mr. Costigan added.

Originally published in the The Globe and Mail on Saturday, April 4, 2009.